Why The Craft Brewers Conference Matters To Customers

Can we get the stubborn elephant in the room out of the way right now? Depending on your perspective, we’re either still in, or about to come out of, a global pandemic. While reading this, you might be shaming those who got on a plane to converge in Denver, Colorado with thousands of other passionate beer people or applauding us for trying to grasp onto whatever dang new normal we get to experience in the right-now. Either way, I’ve got to break some news to you—your favorite breweries from all over the country just masked up and dropped some serious coin to keep our industry thriving and your thirst quenched.

The 2020 iteration of #CraftBrewersCon was supposed to be in San Antonio, Texas, but was forced to cancel, understandably. Then, despite optimism that 2021’s conference was going to resurface in San Diego, California as scheduled, as it usually does in the spring—the BA had to postpone its return to September 9-12. Finally, close to their Boulder, Colorado headquarters, the BA salvaged CBC to host it in their backyard, at the Colorado Convention Center. Noticeably smaller in scale and intensity, this year’s conference resonated in a subtly different way.

My original assignment for Drinkible—what became this piece—was to interview one industry representative, whether brewery employee or allied trade member, from all 50 states. Due to the mask mandate for conference attendees, I threw that plan out the window almost as soon as I stepped foot on the showroom floor. I know we’re supposed to “smile with our eyes,” but trying to identify 50 unique personas from half covered faces proved more difficult than anticipated. As my study of the crowd on an individual basis waned, my awareness of the crowd as a collective revealed a sweet and soft humanity.

I have zero fucks to give when being asked to wear a mask. Why? Because it takes almost no effort to add a layer of protection for myself, and it’s an easy courtesy and sign of respect to my fellow humans. I wanted to attend, I knew the rules of engagement, and I wore my damn mask. Except for when I was drinking.

But, they make communicating difficult. The consistent theme among exhibitors at the BEA trade show was that it made inviting passersby into their booths to showcase their wares a challenge. That meant less foot traffic and potentially less “success” as a vendor (read: sales). That’s an expensive price to pay for reasonably less interaction. That’s no one’s fault, but a fair hurdle.

The BA also invited attendees the option to add a color-coded sticker to their show badge that correlated to their Covid comfort level. Green = Gimme that hug. Yellow = Fist bumps welcome. Red = Six feet, please. While I wasn’t counting and although not everyone chose to use one, Yellow seemed to be the most used. Regardless of preferred color, the overwhelming majority adapted behind their masks and respected the comfort level of others. If one hand extended for a shake and it was met instead by a fist for a bump, there was a consistent head nod and glance that said, “Cool, I respect that.”

Nelson Mandela said, “Education is the most powerful weapon which you can use to change the world.” That logic applies to beer, too. Your favorite breweries cut loose from their taprooms and families for nearly a week are attending CBC in an effort to come home smarter and more efficient. They paid their dues to attend for you—the curious beer drinker, the loyal enthusiast, the needy bottle membership member, and their community. CBC is half educational seminars and half trade show exhibits displaying the shiniest new equipment, software, and widgets and things. Both are rooted in educating attendees about industry best practices and hopefully doing business better than it was conducted yesterday. Why? Because they care about you—the consumer.

Listen, most of you are awesome. Some of you are an absolute thorn in a brewery’s side. If you scoff at that, you fall in the latter category. Still, breweries want to make you happy. To do so, they attend multiple seminars a day led by industry experts and stroll through hundreds of booths across thousands of square feet looking for the next thing that they can bring back to their brewhouse, taproom, or sales team to help make everyone’s job easier, customers happier, and let’s be honest—more money trickle down to the bottom line.

So, the next time you hit up your favorite local indie beer joint, ask them if they attended CBC and thank them when they tell you they did.

Please tell me you’ve been paying attention to all the shit finally hitting the fan in the beer and service/hospitality industries regarding the abuse and mistreatment of females by their male counterparts and guests. If not, Google @ratmagnet and go down that rabbit hole. Then thank her.

Brand new to this year’s event was the #NotMe app. From the BA’s website, “The Craft Brewers Conference is dedicated to providing a harassment-free conference experience for everyone, regardless of gender, sexual orientation, disability, physical appearance, body size, race or religion. We do not tolerate harassment of conference participants in any form. If you witness or experience misconduct, use the #NotMe app to safely and confidentially report it. Together we can make CBC a safe and respective environment for everyone.”

Bravo for embracing this resource.

All work and no play makes a brewery a dull place. The conference starts at 9:00 a.m. every day. Yeah, a.m. Woof. And, CBC is usually in a city with an abundance of beer-centric enticements, many of which keep us out past a responsible bedtime. But, this is intentional. CBC is industry summer camp crammed into a few days, and host cities know to brace for impact. This year, it coincided with Denver Beer Week.

You can visit your local neighborhood brewery weekly and wave, “What’s up!” to the brewer, owner, or make small talk with the bartender. But, there’s something to be said for getting out of town, away from the regular hustle, away from the familiar, away from the customers, and just be able to re… lax…

CBC and its sponsors do an impressive job of making sure those in attendance stay entertained on and off the showroom floor. There’s beer EV-ER-Y-WHERE. All the time. If you don’t respect it, you can go overboard after hitting the tiniest wave. This year, you could really see it in everyone’s bloodshot eyes peeking out over their masks by day two. There’s water everywhere, too. More of that is never a bad thing.

These people deserve a few-day reprieve from grinding it out nonstop for you. And, they make good on it. It’s a special moment when you get to share a beer with someone you admire in the scene or someone from across the country whom you may only get to see once a year. The conversations are deeper, meaningful, with a sophistication and insight that only comes from talking to trusted professionals. And when the shop talk tapers, the social camaraderie and goodbye hugs—and fist bumps—just hit different.

There were obvious, expected barriers to achieving the same scale of this year’s event. Its intent and scope were not lost, however. Everyone’s doing what they’re able and comfortable to, to whatever degree gets them by. Our eyes were tasked with picking up the slack that our mouths couldn’t always convey. Perhaps that allowed us to contemplate more about the seminars we sat in and the hot and pertinent issues that are at the forefront for the next generation of stewards to the industry. Good. It’s time we all pay attention and do a little more to support everyone who is trying to exist with integrity in beer. And, the second we exited the convention center to trade our masks for pints at whatever parties we ended up at, it felt like a common level of decency and dignity followed. 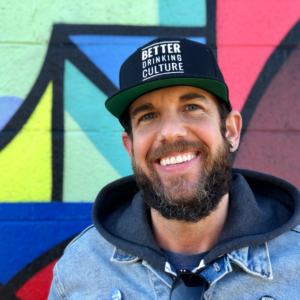