There were no tuxes, no ball gowns, no fireworks, no speeches and no cake.
More appropriately, the city of Howell decided to ring in Michigan’s birthday with local beer and local film — two forms of craft that we Michiganders take great pride in.
The ticketed birthday bash began at Eternity Brewing where guests were invited to a casual beer tasting and tour with the brewery founders and owners, Mike and Dayna Tran. While they talked, we drank.
“After opening, we knew we wanted to do something for Michigan’s birthday,” said Mike, “so these beers are brewed with all Michigan ingredients. Hops from Black Creek Farms. Malt from Pilot Malt House. Michigan apples and cider. Coffee from across the street.”
Previous to the special event this past Saturday, Eternity also released a specially brewed beer for each day of the week. Selection varied from a simple, dry cascade-hopped pale to an apple cider beer as well as a coffee brown. Each flavor and aroma was handpicked to complement local Michigan product.
Having just officially opened this past September, it’s impressive that Mike and Dayna have provided so many quality options for their patrons while coordinating special events as well. To give event-goers some history while we drank our sample of saison fare, Mike admitted, “I planted the seed in her head that I would like to open our own business in the future — I didn’t know that was going to be a brewery, but then we got so into beer. And all of our ideas formed into this BIG thing. And we thought, we’re young, let’s give it a shot.”
Both have multiple years of home brewing experience, but when comparing it to a larger scale, Dayna says they don’t expect consistency. “I think that takes away from the craft of it. We just kinda go for it,” she said.
Mike adds that brewing is similar to cooking. “After you’ve done it for a few years, you can start to predict how things are going to turn out and start tailoring recipes.”
However they combine recipes with experimentation — it’s obviously working. They have gotten tremendous support from their community and growing customer base.
“We consider all suggestions — and we ask. And believe me, our regulars let us know if there’s anything off,” Mike adds.
Building on that theme of community, event guests next drove five minutes away to the Historic Howell Theater to continue the Michigan ode to the craft industry with a viewing of “The Michigan Beer Film,” originally released in 2013.
Once a community attraction, Tyler DePerro, theater owner, maintains that he’d like to continue to grow the theater as a venue not only for films, but also concerts, educational seminars and other community events.
“We originally talked with Eternity Brewing to see if we could get local beer in here,” he said, “but they’re not close to canning yet. But I’d love to do other events with them in the future.”
Before we sat down, he gave a guided tour of the historic landmark, haunted bits included. Established in 1928, this theater began as a one screen viewing platform.
“There was a stage and space for an orchestra pit — they did vaudeville here and everything.”
Taking us backstage, DePerro showed us that even with extensive, modern renovations, this historic landmark holds onto its roots.
“There are bits of the original curtain, and up there are some old seats, and these pillars used to frame the original screen.”
After grabbing some popcorn and snacks to balance out the beer consumption at Eternity, we all took our seats in the cozy theater.
Running at just over two hours, “The Michigan Beer Film” (Rhino Media Productions, directed by Kevin Romeo) displayed the hard work, support and passion of the craft industry in Michigan.
We were shown endless, towering rows of hops being grown right here in Michigan. New entrepreneurs building their craft futures right here in Michigan. Brewers talked to us. Farmers showed us their country. Patriarchs of the industry like Rex Halfpenny and Larry Bell were repeatedly hailed by everyone being interviewed. “[They] are what started it all — the godfather, the uncle of craft beer.”
Everyone in the film reminded viewers what the meaning of ‘craft’ really meant for Michigan inhabitants. It’s dedication, drive, heart, soul, community, risk — all combined to celebrate something we may not need as humans, but something we will never stop enjoying. Like Rex Halfpenny famously stated, “Man’s the only animal on the face of the planet that drinks when he’s not thirsty.”
New brewers and enthusiasts, such as Mike and Dayna at Eternity Brewing, keep the Michigan craft dream a growing tradition. Whether it’s the state that makes the beer, or the beer that makes the state, Michigan will continue to be defined by its local craft. With each passing birthday, craft enthusiasts raise their glasses to this state. Michigan. The best state ever, in our opinion. 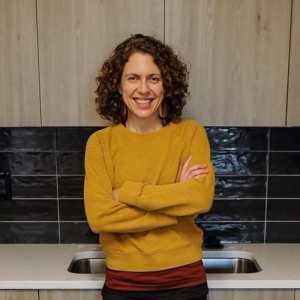