New brewery on the Block in Howell

HOWELL — After months of intense renovation, the caterpillar that was once the Shark Club of Howell has emerged as the butterfly that is now Block Brewing Company, the latest Michigan craft brewery to open its doors to a public increasingly craving fresh, local beer.

It’s all the result of the collaborative vision put together by owner-operator Mike Magyari, general manager Richard Gonzales, and Block himself.

“Over the years the billiard and nightclub business has changed, and when we decided to go in a craft beer direction it was really successful, so we decided to change the name and start brewing,” said Magyari. “Tom had been a longtime Shark Club customer and we talked about doing something like this for a while, and finally it kind of just came together.”

“I’ve been in food service for about 30 years with a lot of chain experience, but what got me excited about this was the craft beer aspect as well as being part of an independent operation, where you aren’t beholden to stockholders and can be more involved at the local level,” said Gonzales. “I’m an avid consumer of beer — working with a guy like Tom is going to make it that much better.”

Block brings many years of zymurgical experience to his new role as head (and so far, only) brewer, including a past brewing stint at the now defunct Michigan Brewing Company; brewhouse design consulting for the likes of Grand Rapids Brewing Company and HopCat East Lansing; and several semesters teaching the art and science of beermaking under the auspices of Michigan State University’s Artisan Distilling Program.

“The pale ale is 100% single hopped with Galaxy, a beautiful, beautiful hop. I’ve got enough supply to keep that on all the time,” said Block. “This is the beer I deliberately made for myself.”

Beers from other prominent Michigan breweries like Bell’s, Founders, New Holland, Short’s, Dark Horse and Brewery Vivant filled out many of the other taps. As a brewpub licensee, Block also offers a full bar including wines, spirits and liqueurs, for those times when you (or your date) just don’t feel like beer.

As for the interior atmosphere, the aquariums, poker and pool tables, pinball machines, and other accoutrements from the Shark Club days have been removed in favor of a uniform and cozy dark wood paneled look. The seating alongside the windows facing the parking lot has been replaced with the brewhouse, which sports a brand new seven-barrel system from Quality Tank Solutions of Wisconsin. (The space, naturally, was designed completely by Block, who says of his system, “She’s a beauty.”)

Future plans include more experimental and barrel aged beers, a possible Mug Club membership, beer dinners and other special events, and, down the line, perhaps even expansion and distribution if business takes off.

“We’ll start here first, build our brand, and then see where it goes,” said Block. 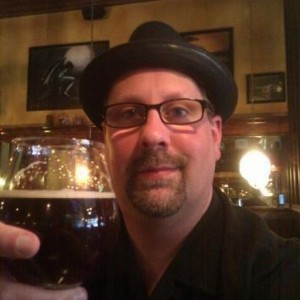 David writes regular columns for The Ann Arbor News and Great Lakes Brewing News, along with occasional features for Michigan Beer Guide and other publications. His book, Ann Arbor Beer: A Hoppy History of Tree Town Brewing, is available on Amazon.com and wherever fine paperbacks are sold. A lifelong Michigander, longtime craft beer drinker and sometimes homebrewer, he lives in Ann Arbor, where he maintains his blog at AnnArborBeer.com.
PrevOlder Stories
Newer StoriesNext